Mysteries of the Well House 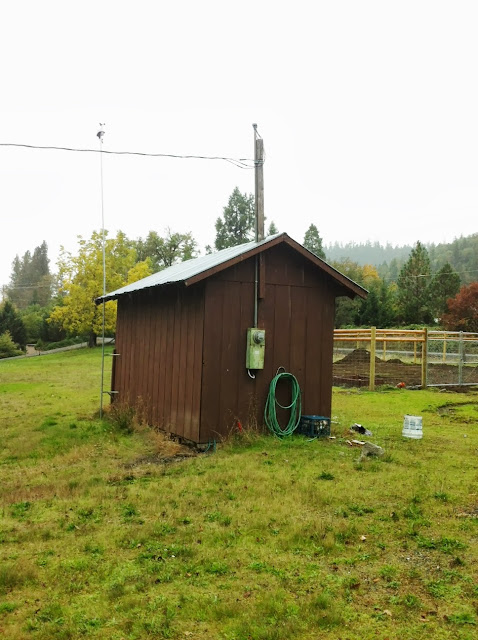 Like most homes in rural Oregon, our water comes from a well.  There's municipal water in the city of Rogue River, but two miles out, you're on your own.

Oregon water law is similar to the Talmud, but more complicated.  Basically, all the water in the state belongs to the people.  You can use water from your well for household use and to irrigate a garden up to 1/2 acre, but acreage beyond that must be irrigated with surface water.  We can pump water from the creek for this -- if we pay $330 a year for the privilege and if our "water rights" to the creek are still valid.

The Roguefarm well house encloses our well and water processing stuff.  Originally, it had its own electric meter, but is now powered by underground cable from the house.  Water from the well house goes through pipe to the house and also feeds irrigation water to hoses and sprinklers. 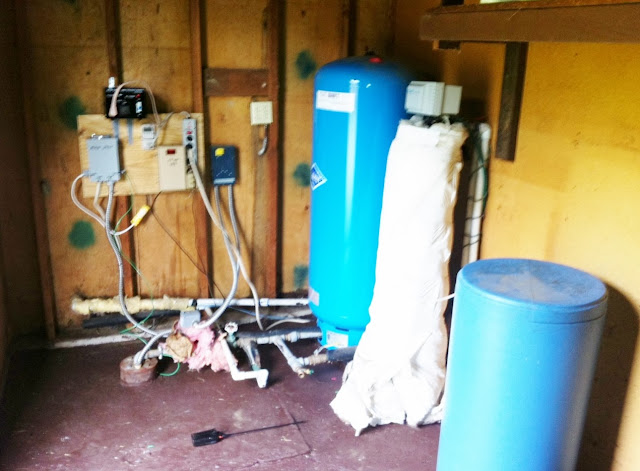 Inside the well house.  The well itself is to the left.  Since Jack & Jill were not available, the builders used an electric pump to deliver the well water.  The pump is actually at the bottom of the 65-foot-deep well and
runs on 220V power.  The tall blue tank is the "pressure tank," the one wrapped in insulation is the water softener and the squat blue container is the "brine tank." 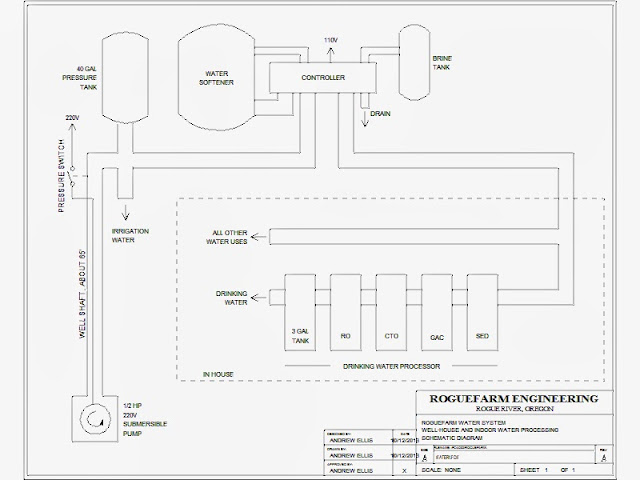 This diagram shows how the water system works.  Water from the well is sent out to irrigation use untreated.  The pressure tank stores water so the pump doesn't need to start every time you turn on a faucet.  When the pressure starts to drop, the pressure switch turns on the pump to refill the tank.

In the water softener, minerals dissolved in the well water are replaced (I think) with salt.  The controller monitors how much water we use and periodically cleans the beads inside the tank by flushing water through it backwards.  It recharges the beads by dosing them with brine, which is stored in the brine tank (duh) along with salt granules.

In the house, softened water from the well house is used for everything except drinking.  To provide better-tasting drinking (and cooking) water, a multi-stage filter removes sediment and minerals.  The heart of it is a "reverse osmosis" filter.  It uses water pressure to force water through tiny pores in a filter through which minerals cannot pass.  The bargain you make with the Devil in R/O systems is that they waste a gallon or more of water for every gallon they process, mostly to flush out the filter membrane.  The R/O system can purify about 50 gallons of water a day, but it takes 24 hours to do that much.  A small storage tank lets us use up to 3 gallons of drinking water at once, then refills from the R/O filters.

Today's project was winterizing the well house.  Since water expands when it freezes, frozen water will crack pipes. 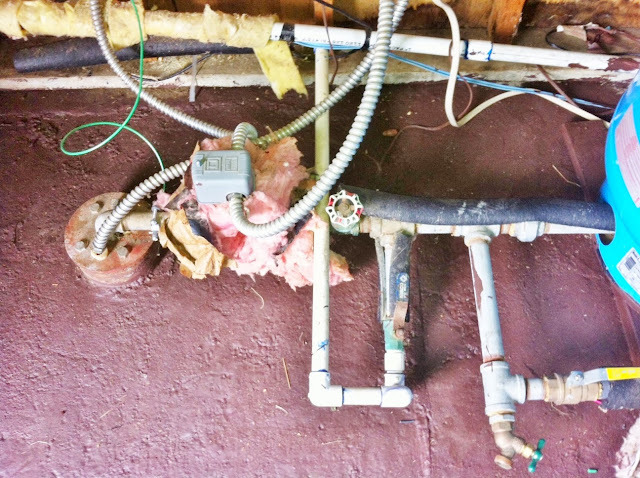 This "before" picture shows the pipes that connect, among other things, the well, pressure switch and pressure tank.  Some of the pipe is iron, some is plastic.

To keep pipes from freezing, I use "heat tape," which looks like an extension cord, but is made of resistance wire that heats up when electricity flows through it.  A thermostat ensures that the heat tape only comes on when the temperature falls to near freezing.

The other part of prevention is foam insulation around pipes.  This keeps the heat tape close to the pipe and insulates it from cold air. 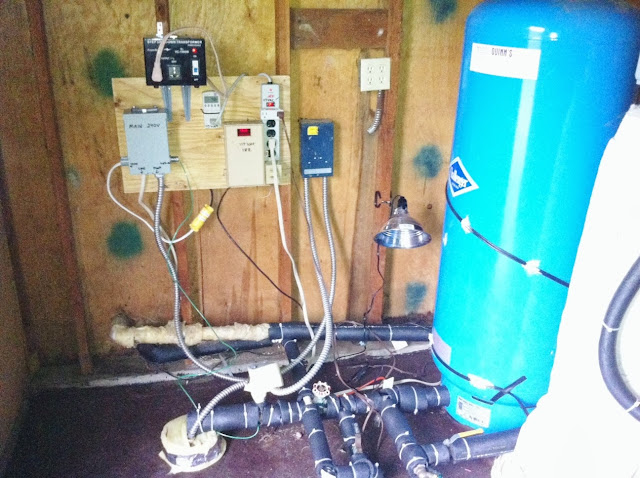 In this "after" picture, you can see the insulation installed over the pipes.  I've also put a couple of wraps of heat tape around the tanks, too, so they won't freeze...I hope. 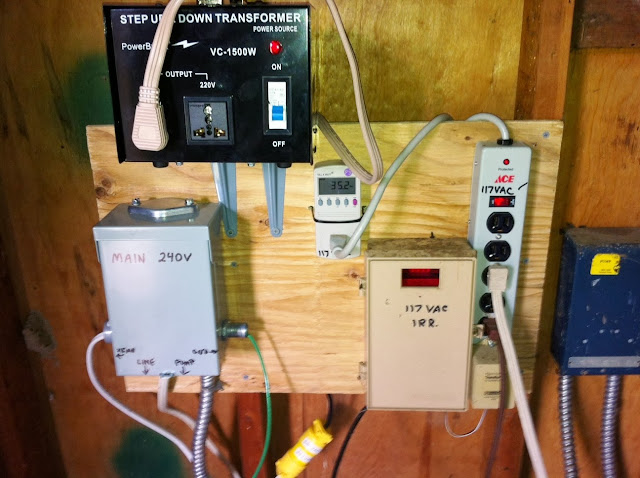 Water and electricity may not mix, but at Roguefarm there's a lot of electricity involved in water.  When the previous owner installed underground wiring from the house, he did so in a way that brought in 220V for the well pump, but not 110V for other uses in the well house.  (You may recognize this as wiring with two hot leads and a ground, but not a neutral wire).

To deal with this, I added a new breaker box (the gray one to the left of the picture, with a 30A 220V breaker that feeds the well pump.  It also feeds a step-down transformer (above) that produces up to 1500 watts of 110V power from the 220V source.  The output of the transformer is monitored by the little "Watt-miser" thing, and is then used to supply the water softener controller, heat tape, irrigation controller (the brown thing) and anything else in the well house that needs 110V power. 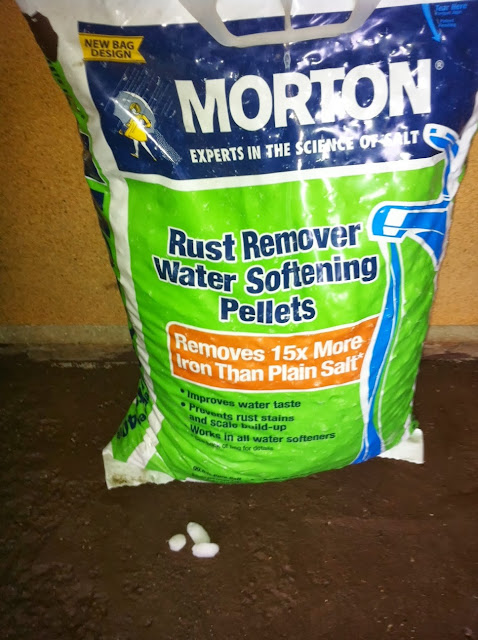 As noted, the water softener cleans itself with brine, which it makes from water and salt.  The three pellets in the picture show the kind of salt it uses.  The bag holds 40 pounds and costs around $6.  When the brine tank runs low on salt, I dump in another bag. 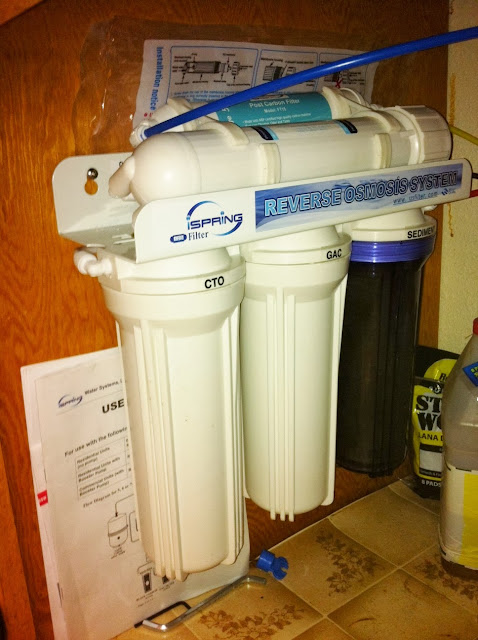 Under the kitchen sink in the main house is the R/O system.  The five filters last six months in some cases and a year in others.  The R/O filter itself (which is expensive) seldom needs replacement.

A coward by nature, I hired a local plumber to install the R/O system.  That's why it doesn't leak as it would if I had done it myself.

Today I finished staining the raised beds and set them in place inside the 50 x 50 foot "Deer Stalag" garden.  (The fence is 6 feet high, but some locals claim that some SuperDeer will leap over even 8 footers.  We shall see.)  Note that the fence is lined with "Graduated" wire - close together at the bottom, to keep out little critters, and wider as it goes up, since large mesh is cheaper and still too small for deer to squeeze through. 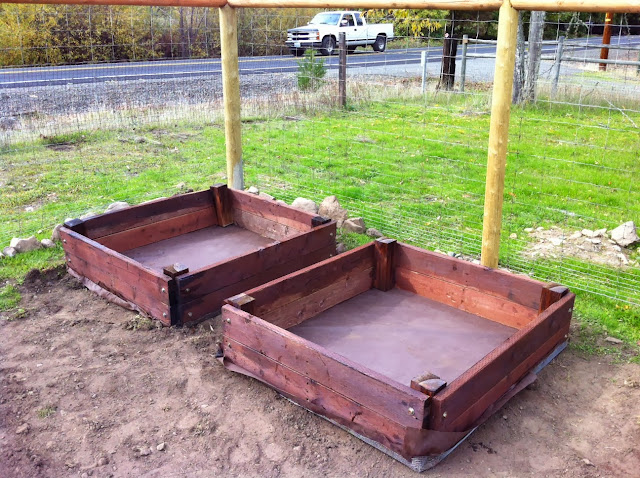 The stain is Superdeck Transparent Stain in "Canyon Brown."  The color was recommended by the fence company for the posts in the fence (note that they are not stained yet).

The stain only goes about 3" down from the top on the inside of the bed, since the rest of it will be covered by dirt when the bed is filled.

These beds were a gratifying project, keeping pressure-treated wood out of a land fill while providing us with more raised-bed planting space.

We recently had the steps at both ends of our rear deck rebuilt.  The old ones were made of pressure-treated lumber, which you're not supposed to burn.  Instead of sending it to the landfill, we decided to repurpose it into raised-bed enclosures for our garden.  Some think it doesn't belong in gardens, either, but it seemed better to us to use it.

Stairs usually have two parts; a horizontal piece you step on called a tread and a vertical piece at the back of the tread called a riser.  On our stairs, they were made from "Two-by-Six" lumber and each were around four feet long.  There's no magic to the size, but our beds came out slightly rectangular because the treads and risers were different links.  It doesn't matter.  If you have to buy lumber, you can use all four foot long pieces.

A note about lumber:  When you go to buy wood, it's usually labeled "two-by-four," "four-by-four" and so forth.  These are supposedly the size before finishing.  Whatever the reason, lumber is ALWAYS smaller than the numbers suggest.  In this project a "two-by-six" measures about 5-3/8  by 1-1/2, while a "four-by-four" post is about 3-3/8" square.  Don't worry about it. 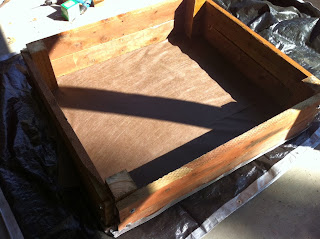 This drawing and parts list shows how the beds go together: 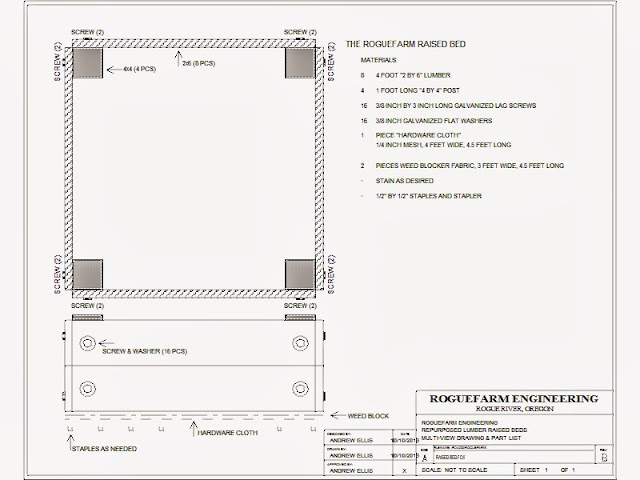 For two boxes, I bought an eight-foot-long piece of four-by-four and sliced it into eight one-foot lengths.
If you were buying wood for the sides, you could use eight four-foot lengths of two-by-six, cut from two boards each eight feet long.  If you can, get the store to do the cutting for  you.  I cut the corner posts myself using a hand-held circular saw, which is convenient but very dangerous.  If in doubt, use a hand saw instead.

Each of the eight side pieces is screwed to the corner post with two lag screws.  The ones I used are 3/8 inch in diameter by three inches long.  I used a 3/8 inch flat washer under each screw head. 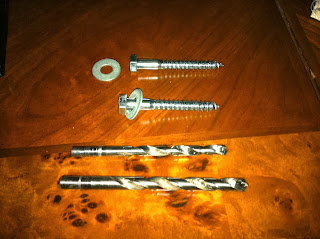 Lag screws have a hexagonal head.  The 3/8 inch size can be tightened with a 9/16 inch wrench.
As you can see, the screws have a large smooth section, called the shank between the head and threaded portion.  When you install a lag screw, you drill a hole for it with an electric drill.  Holding the side against the corner drill a 5/16 inch hole through the side and into the corner post.  Make the hole about three inches deep.  This pilot hole keeps the screw straight.  It's slightly smaller than the threaded part of the screw, so the threads can bite into the wood.  After the pilot hole is drilled, you drill a second, larger hole through the side piece but NOT into the corner post.  This shank clearance hole is 3/8 inch in diameter.  The screw should tap in easily through the side piece, then you tighten it down using the wrench.  I usually leave each screw slightly loose, about 1/8 inch above the side piece, until all four screws on that side of the box are in.  Then I tighten each of them until the washer is pressed slightly into the wood.  If you over-tighten the screw, you can strip the hole, so the threads can't bite and the screw turns freely.  If this happens, just drill new pilot and shank-clearance holes nearby and try again.  The exact position of the screws is not at all critical.  On the drawing, you'll see that I offset the screws on adjacent sides a bit so they won't hit.  This isn't likely to be a problem anyway, though. 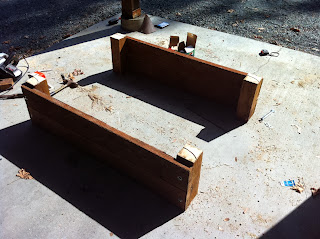 Notice that the corner posts stick up a bit above the sides, because the two sides add up to less than 12 inches.  The end that sticks up will become the top of the bed and the other end the bottom so the bed will sit flat. 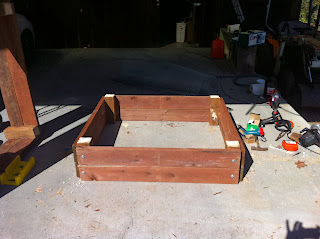 That's the end of the carpentry!  Now turn the bed over so the flat bottom is facing up.  Using a staple gun, fasten weed-block fabric to the base of the bed: 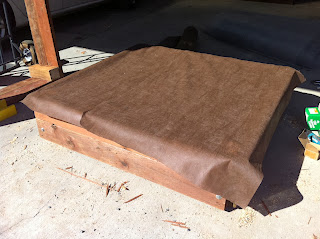 The fabric I used came in a three-foot-wide roll, so I overlapped it in the middle, leaving a few inches of margin beyond the frame, then fasten it down with staples.

To keep gophers and other critters from burrowing into the bed, I covered the bottom with screen, or, as the hardware-store people call it hardware cloth.  Made of galvanized steel wire, the size I used had quarter-inch mesh and came in a four-foot wide roll.  This is an expensive item -- I paid around $5 a foot for it, and you need 4 and a half feet for each box.  But I think you'll regret it later if you do without.

Leaving an inch or so of overlap on each side, staple the hardware cloth to the frame on top of the weed-block fabric.  If you bought it in a long roll, as I did, cut it to length using tin snips. 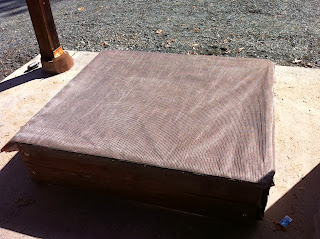 Fold over the excess fabric and hardware cloth and staple them to the sides.  Assembly is finished!
This "see-through" view shows how the fabric was overlapped in the middle: 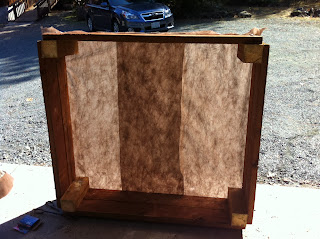 You can stop here.  I decided to stain the wood with a brown transparent wood stain to even-out the color, especially of the raw wood at the ends of the corner posts where they were sawed.
Posted by Engr_Andy at 20:29 No comments: