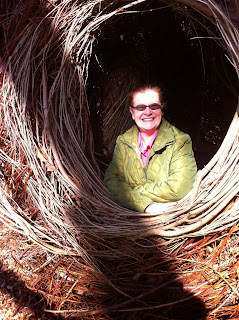 Deborah on Jeopardy! The Back-Story

Deborah has earned a contestant spot on Jeopardy!  She'll be in one (or more!) of five episodes to be taped on December 4, 2013 and airing sometime in the week of March 24, 2014.  Here's how it came about:

Deborah has loved the Jeopardy! TV show since time out of mind.  As many of us have considered, but few have done, she actually tried out to  be a contestant on the program - four times.

Jeopardy!  uses a January on-line test to pre-qualify would-be contestants.  It's a wicked exam:  There are fifty questions in fifty categories, and you're given only 15 seconds to type the answer to each one.  Generously, though, the test does not require you to state the response as a question, as you must on the live show.

One never knows how one did on the test.  Either you get invited to a secondary tryout sometime in the next few months, or you don't.  The test that got Deborah was on the show was in January 2012.  Since contestants remain in the "contestant pool" for 18 months, one cannot qualify using next year's test if one is still in last year's pool.

Unusually, Deborah was invited to the secondary tryout on all four of her attempts.  These are regional, though one is always offered the possibility of trying out at Starbase Jeopardy! at Sony Pictures Studio in Culver City, California as well.  Deborah has always felt that one's chances are better, though, at one of the outlying sites rather than in L.A., where there are many locals competing.

The secondary auditions she attended were in San Francisco, Seattle, Los Angeles and Sacramento, with the last being the one which got her a coveted slot on the program.  It had  been almost 18 months since the Sacramento audition, and she was beginning to lose hope.

The auditions are usually scheduled at a large hotel.  There are usually several auditions over one or two days, but each entrant is assigned to only one.  On arrival, one is given a sourvenir Jeopardy! pen, which one uses to fill out a basic information sheet.  After checking in, the 25-50 auditioners go into the room and meet the contestant wranglers.  Either at sign-in or in the AV-equipped room, each contestant is photographed, and given the photograph to hold.  At her auditions, the wranglers actually used Polaroid film cameras, having apparently bought up all the remaining film stock.

The wranglers welcome the auditioners, crack a few jokes, and explain some of the many legalities involved in the show.  They play a welcome message taped by Alex Trebek.  The wranglers pass out a sheet with fifty numbers, and you enter your name and the date.    Now the contestants take a second written test, this time with one of the "Clue Crew" members reading the clues on video.  It's the same format as the online test - fifteen seconds per question and responses need not be in question form.  At the end you hand in the test, the questionnaire and your photo.

The wranglers leave to grade the tests, while the auditioners take another similar exam.  During this time, the wranglers set up the matches for the mock game-play.  Auditioners are called up in threes, and are shown how to use the all-important Jeopardy! signalling button.  A video screen shows six categories, but only a few questions under each one.  The person assigned to the "Champion" spot, selects the first answer: "Alex, I'll take 'The Crimean War' for 600."  After that, it's regular play, including the infamous "lockout" function:  If you ring-in before the question is completed, your are locked for a second or two, so you don't want to press the button too soon!  If one auditioner is dominating the ring-ins, the wranglers will call on the others to be sure each gets at least few questions to answer.

Next comes the interview.   On the information sheet, auditioners had listed five "stories" they suggest for interviews.  The wrangler will ask, for instance, "So, tell me about your pet foxes."  You banter a bit, and are asked what you would do with the money if you won the game.  You're sent back to your seat, and the next group of three is called up until everyone has appeared.  Deborah has been in  both the first and last groups called, so the choice may be random, or perhaps they match people by their test scores.  It's one of the many mysteries of Jeopardy!.

At the end, the wranglers explain the "contestant pool."  Everyone who comes to a live audition is automatically in the contestant pool.  You remain in the pool for 18 months, though the show does not tape year-around.

The rough numbers:  About 50,000 people take each on-line Jeopardy! test.  About 2,000 are invited to the auditions and put into the contestant pool.  About 400 people will eventually be on the show during that period.  So, the overall odds from beginning to end are roughly 0.8 percent of getting on the show.  As in the on-line test, you never learn what is a passing score or what you scored.

The other day, Deborah was working in the garden and, as usual, left her cell phone in the house. "When I came in, I saw that I had missed two calls.  One was from my daughter, the other from an unknown caller in area code 310 - Southern California.  The next morning, I'd been trying to figure out who had called, and finally decided to just call back and say 'Someone called me from this number yesterday.'   I dialed the number, and a friendly male voice answered: 'Jeopardy!'

My heart pounded.  'Robert' told me had called to invite me to be on a Jeopardy! episode that would tape on December 4, 2013.  The program tapes five episodes in one day.  If I were champion at the end of the "week" of episodes, the next taping would be two weeks away, on December 18th.

Robert asked me a long list of qualifying questions.  Most were routine.  Then he asked 'Do you know anyone who works for CBS Television, Sony Pictures Studio or their legal-compliance company.'  I explained that my husband had retired from CBS Radio in February and had worked in the same building as CBS Television's KPIX-TV.  Robert asked a few more questions, then said he would have to call me back about the conflict.

The quiz-show of the 1960's are forgotten by most people but still loom large over production of any game show.  The producers bend over  backwards to avoid even the slightest appearance of impropriety.  Happily, Robert called back to say that the powers-that-be had OK'd my appearance."

Robert explained the Sony has an agreement with a local hotel for housing contestants and provides transportation between there and the studio.  He promised to email me even MORE detailed paperwork for me to complete, ASAP.

We'll keep you posted on future doings.  In the meantime, Deborah is over the moon at the prospect of finally being on Jeopardy!  It's always been on her "bucket list."  Besides, the rules say that you can only be on Jeopardy! once - though some may be invited back.  That makes it, literally, as once-in-a-lifetime opportunity.