Any Jeopardy! viewer knows that the signaling button is perhaps the most important and yet difficult part of playing the game.

When Alex finishes asking a question, an off-screen staffer presses a button to allow contestants to "ring-in" and be recognized to give their response.   If a contest rings in before the "end-of-question" switch, their signal is disregarded AND their button is locked out from signaling again for a while.  (I'm not sure exactly what the lockout period is, but it's probably between 0.5 and 2 seconds).  When a contestant is locked out, other contestants have a chance to ring in ahead of the one who jumped the gun.

One of the reasons long-time champ Ken Jennings stayed so long as a champion was his mastery of signaling.  It's a human who presses the "end-of-question" switch, so the best competitor will be the one who is most in-sync with rhythm the staffer uses to press the switch.

Contestant wranglers tell would-be contestants to practice ringing-in, even suggesting using the souvenir Jeopardy! pen they receive as a practice device.  But the pen is not as big as the button used on the show and, most importantly, does not provide feedback when the  button has been pressed.

Since Deborah is going to be on Jeopardy! in only a month, I embarked on a crash program of practice signaling device development.  Electrically, it's simple:  A transformer converts 117 volt power from the wall into 10 - 16 volt power needed to operate a doorbell.   One of the output terminals of the transformer goes to one of the terminals on the bell, the other through the contacts of a pushbutton and then to the other contact of the bell.

The most important part, the signaling controller, turned out to be the easiest: 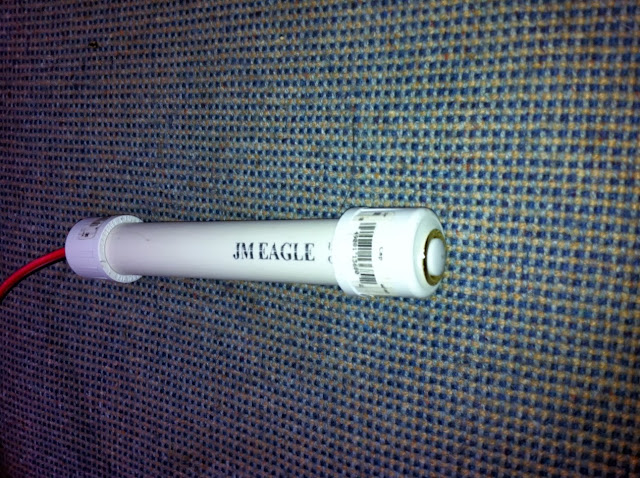 I used a piece of 3/4" PVC plumbing pipe about 6" long and two 3/4" PVC plumbing pipe caps, for a total price of $2 or so.   The  button is a regular old-fashioned doorbell button that snaps into a 5/8" diameter mounting hole.  It has two screw terminals, onto which I attached a 4' or so long piece of red/black "Zip cord," the kind of wire used in small appliance power connections.

There were a number of doorbells at the hardware store and at the home center.  Some were wireless, with a small battery in the  button enclosure to power a tiny radio transmitter that signaled the bell when the button was pressed.   Others were "wired" types, using the transformer, bell and button system described above.

Wired or wireless, though, the electronic doorbells all proved inadequate.  The reason is that all of them use an electronic circuit.  When the button is pressed, the circuit changes the AC power from the transformer to DC power to operate the sound generator and amplifier that feeds a built-in speaker: 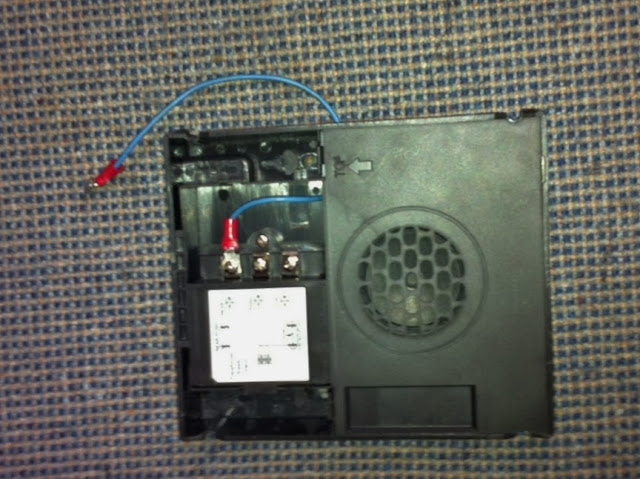 Here's one of the electronic doorbells.  The fatal flaw in them for me is that it takes a finite amount of time for the power conversion to DC, so the "bell" doesn't ring until 0.5 to 1 second after the button is pressed.  As a doorbell, you probably wouldn't care that the bell didn't sound until a second after you pressed the button, but on a game show that delay is intolerable.

In the old days, doorbells were simple.  They used a solenoid, a simple electro-mechanical device that changes electric power to physical motion.   It's really nothing more than a sliding piece of steel inside a coil of copper wire.  When power is on, the steel is pulled into the center of the coil by magnetism.  When the power goes off, a spring returns the it to the original position.

Many doorbells have two chimes, and are set up so that you can have the front door bell go "Ding-Dong" and the back one just "Ding."

After the hardware store and the home center, I was driven to the place I should have gone first, an honest-to-goodness electrical supply store.   There I found a real solenoid-operated doorbell for $12: 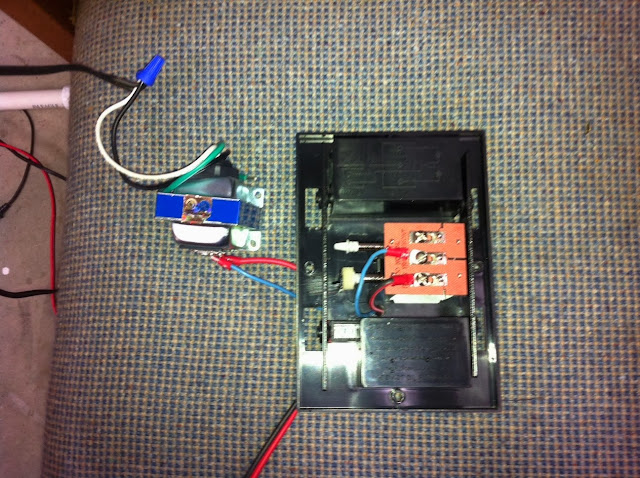 The picture shows the transformer to the left and the doorbell to the right.  The chimes are rectangular pieces of steel.  There are two solenoids in the center.  When the "front doorbell is pressed, the top one (the one with the white plastic striker) pulls to the right and hits the "ding" chime.  When the button is released, the coil spring pulls the shaft back, where it hits the left "dong" chime.  Since I only wanted one chime, I used the lower solenoid.  The "ding" part operates the same as the upper one, but when the button is released and the spring forces the shaft back, it is caught by a (yellowish) foam cushion, so there's no sound made.

It works perfectly.  The button turns out to be an illuminated model,  making it easier to see in the dark.  Not needing an official enclosure, I just stuffed the transformer and  bell back in the box they came in, with the power and button cords running out under the lid: 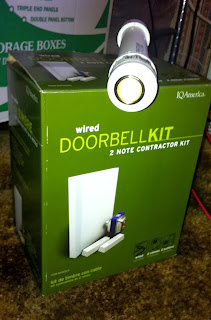 So, when the answer is "It's the number of doorbells Andy had to buy before getting one that would work," the question is "What is three, Alex?"