The Fungus Among Us

Our latest addition to Roguefarm is a small mushroom-growing setup.

It's a task that calls for lots of patience.  While some varieties can be grown in six months or so, others take as long as three YEARS before they can be harvested.  That's if the whole thing works at all, that is.

It turns out that one can buy mushroom spores (including psilocybin "Magic Mushrooms" if that's what you want) on line from various vendors.

We set out to choose varieties first, and settled on three:

The Blue Oyster, Pleurotis Ostreatus var. Columbinsus, is a gilled mushroom and is widely eaten.  We picked it because it is supposedly one of the easier varieties to grown. 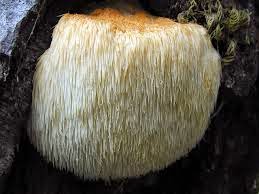 The exotic-looking Lion's Mane mushroom, Hericium Erinaceus,
is a "tooth" mushroom, meaning that it grows its spines from one central body instead of from branches.  We've never tasted one, but they are often compared to seafood and are widely used in vegetarian cooking as a substitute for various animal proteins. 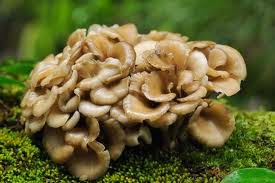 The Maitake, Grifola Frondosa, grows from an underground portion, so it can fruit year after year once established.  Also called the "Hen of the Woods," it's used widely in Japanese cuisine.  We chose it because it's one we know and that we can harvest repeatedly.

Since we have lots of logs around, we chose to use a technique called "plug spawning" that grows mushrooms on logs.  Our spores came from Fungi Perfecti in Olympia, Washington.

When you buy spores for plug spawning, they come in this form: 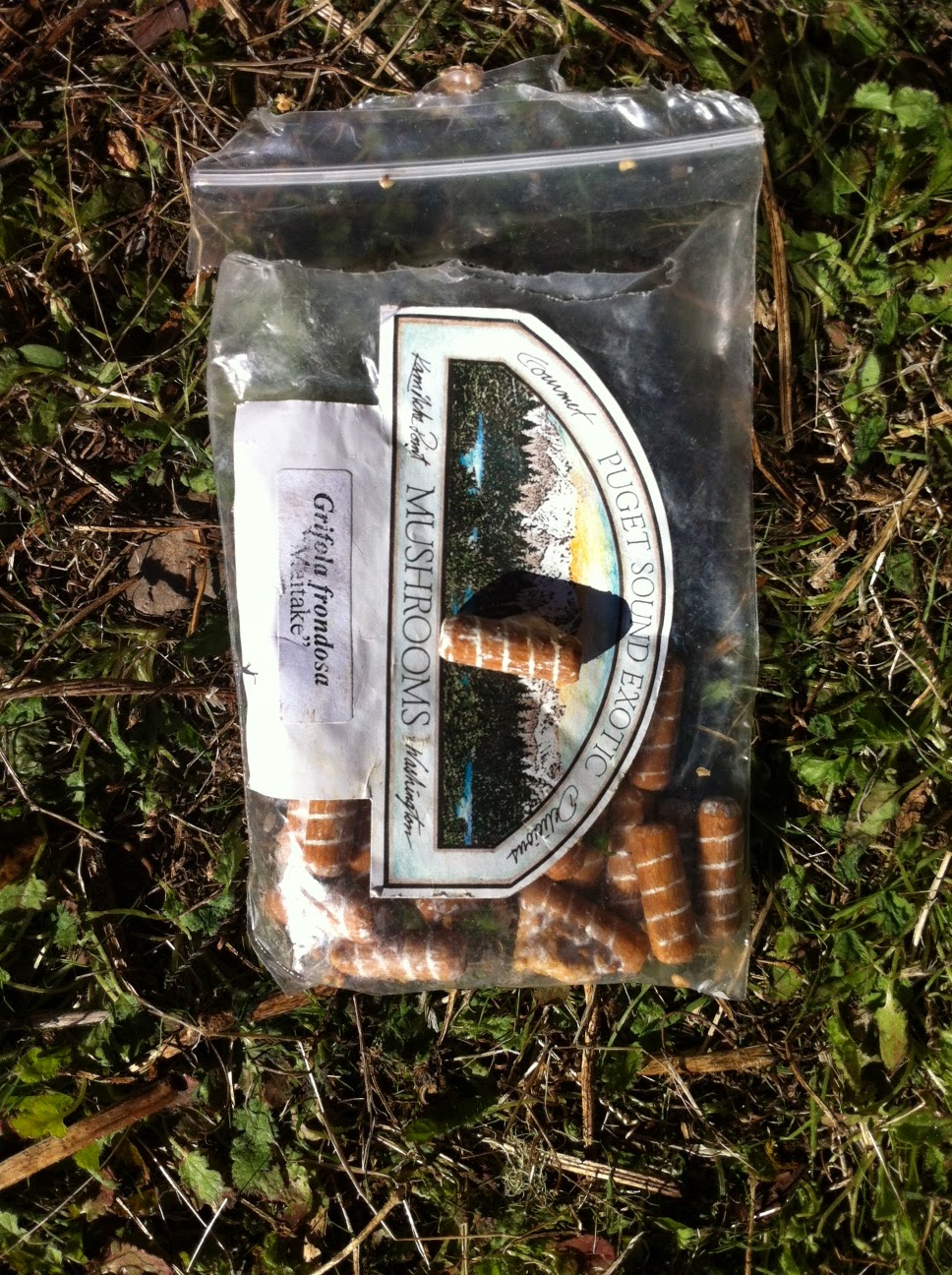 The actual spores (the white stuff) are grown in spiral grooves cut in short pieces of wood dowel.  To plant them, you drill holes in your log, tap in the dowels with a mallet and seal them over with edible wax (we used soy wax, but beeswax is OK, too.  The holes are drilled in a checkerboard pattern to help the fungus to colonize the wood.  After it's done, the log looks like this: 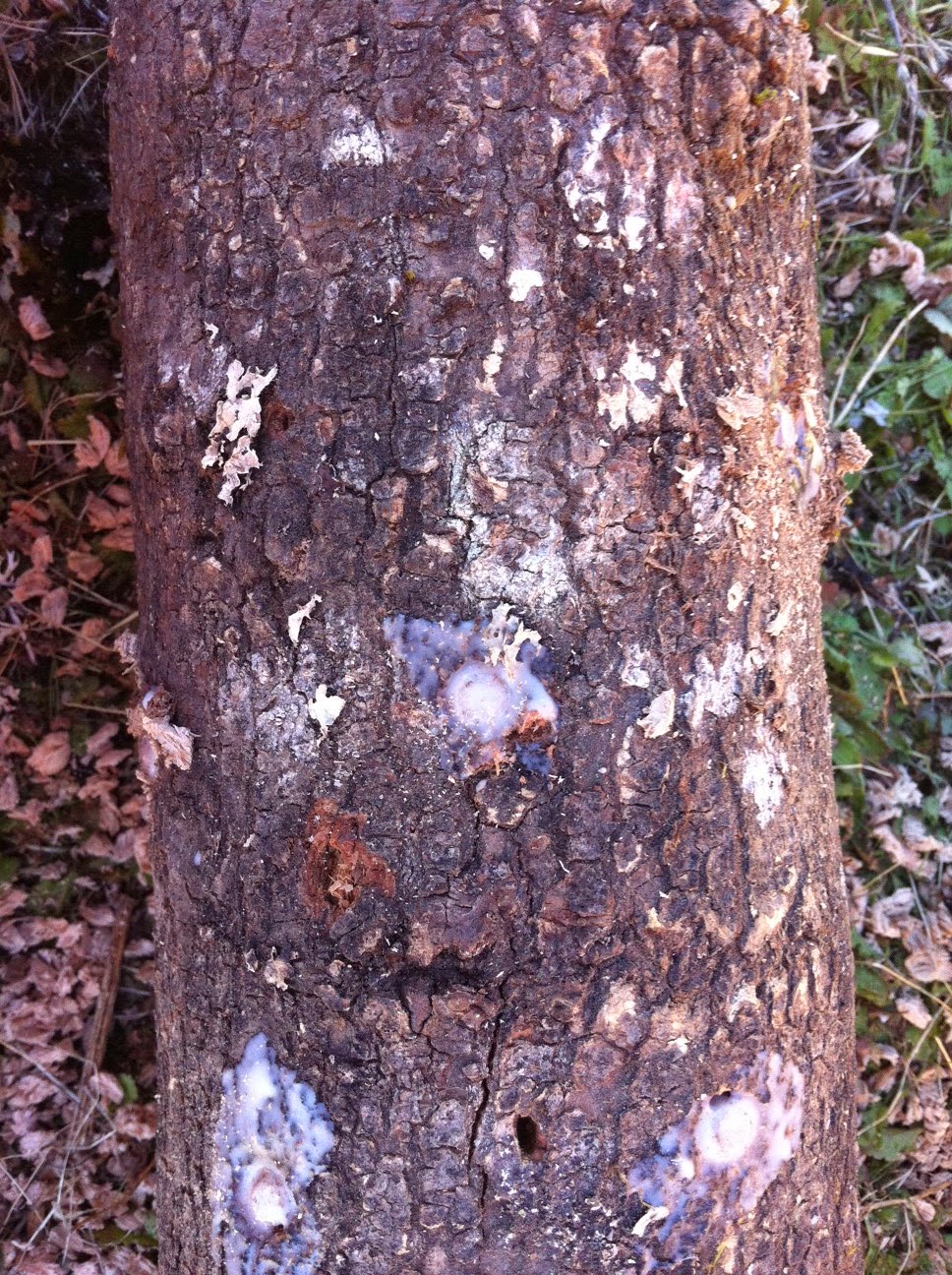 We stuck our logs in a cross-layed pattern under one of our shadier trees and extended our drip irrigation system to keep them moist: 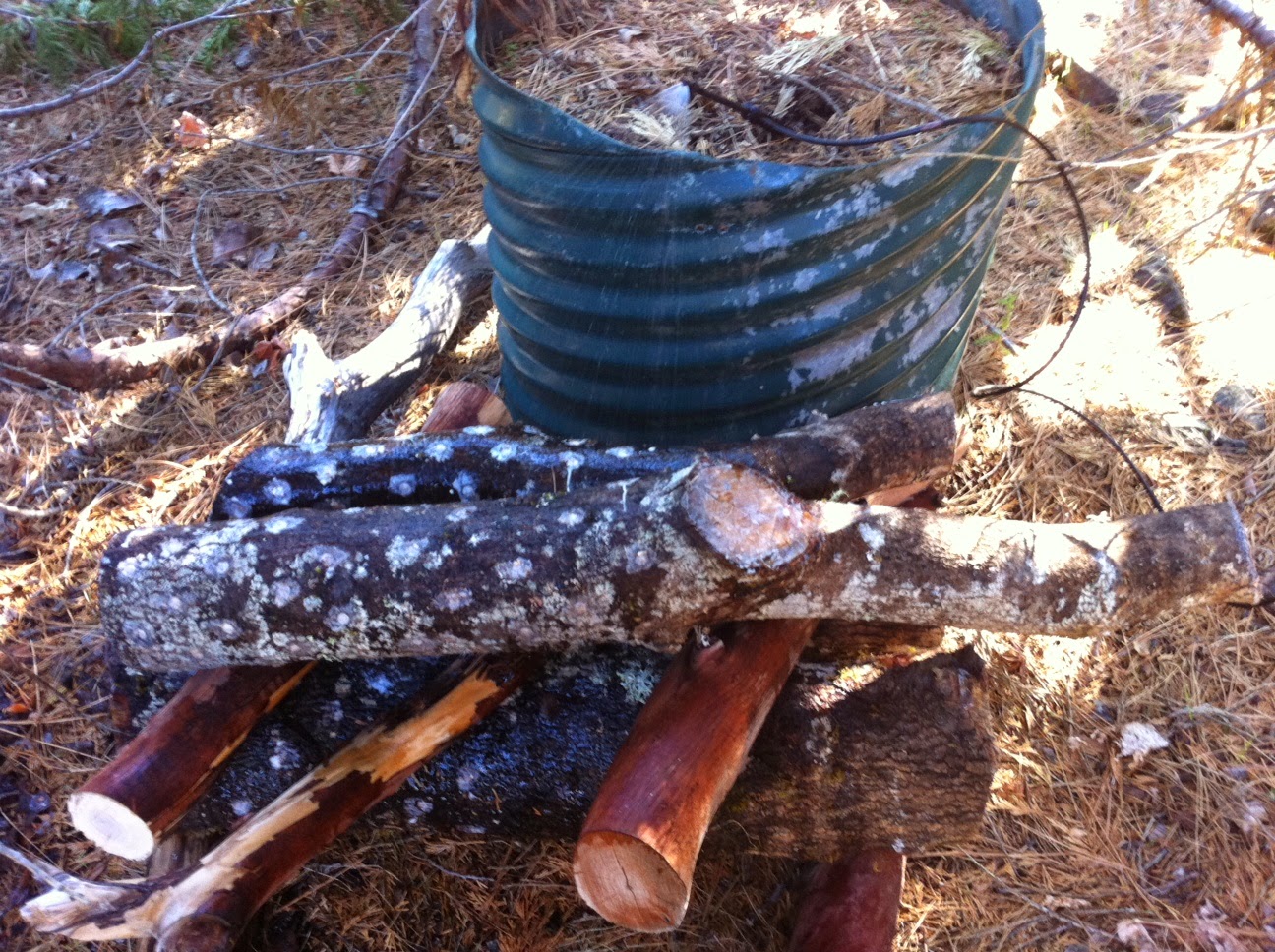 The two logs on top are Maitake, the two beneath Blue Oyster.  They're oak logs, which mushrooms like, and are supported by the barkless madrone, which they don't.

Will it all work?  Stay tuned.  It's a long process, and there's certainly no guarantee of success.  We'll let you know in a year or so.

We've had the CritterCam for a while now, and it's captured a fair number of, well,  critter photos.

Recently, we got around to hanging the birdhouse we bought in the spruce tree next to the rear deck: 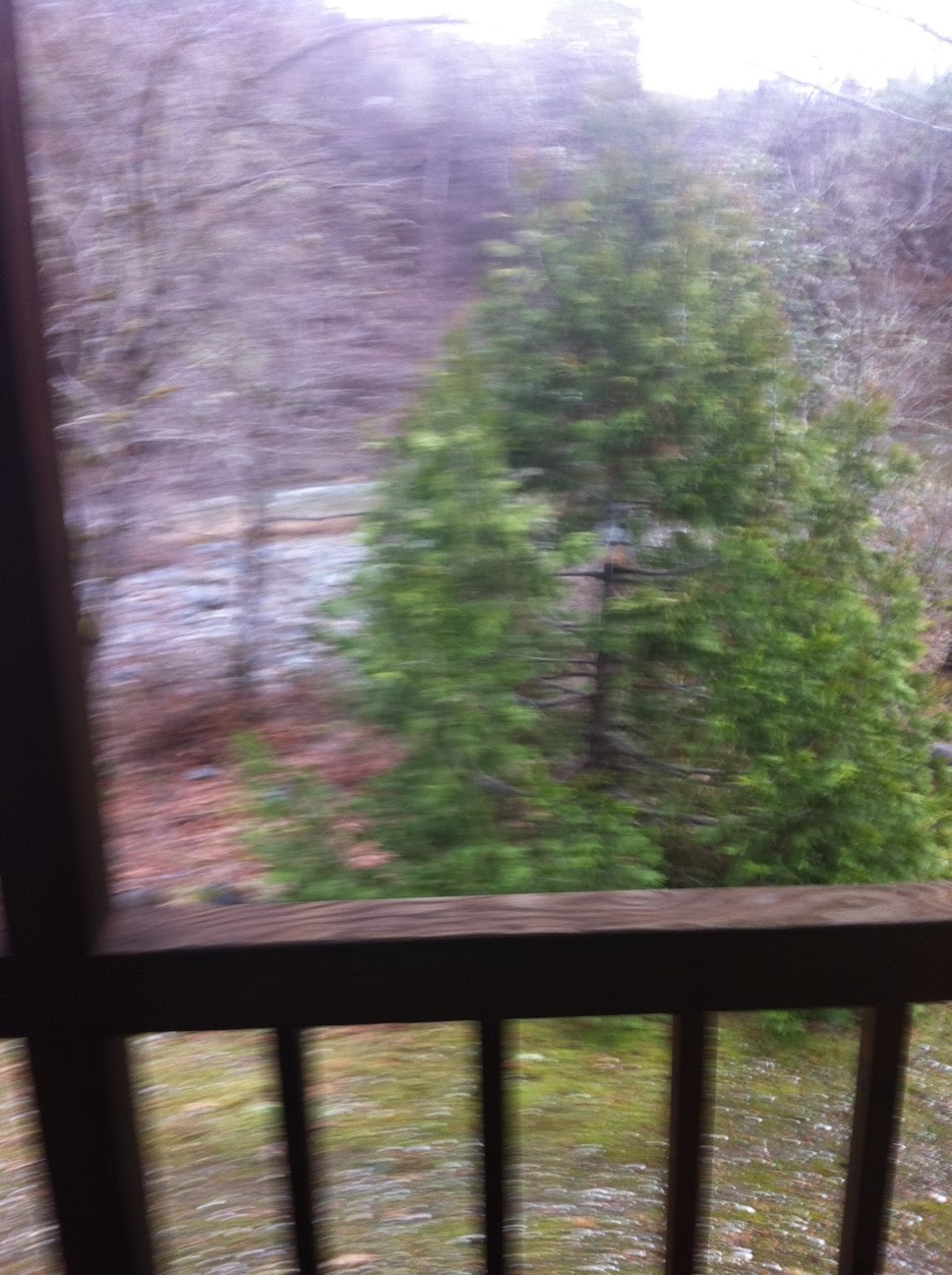 It's a very Oregon birdhouse, bought at a farmers' market from a guy who builds them from discarded materials: 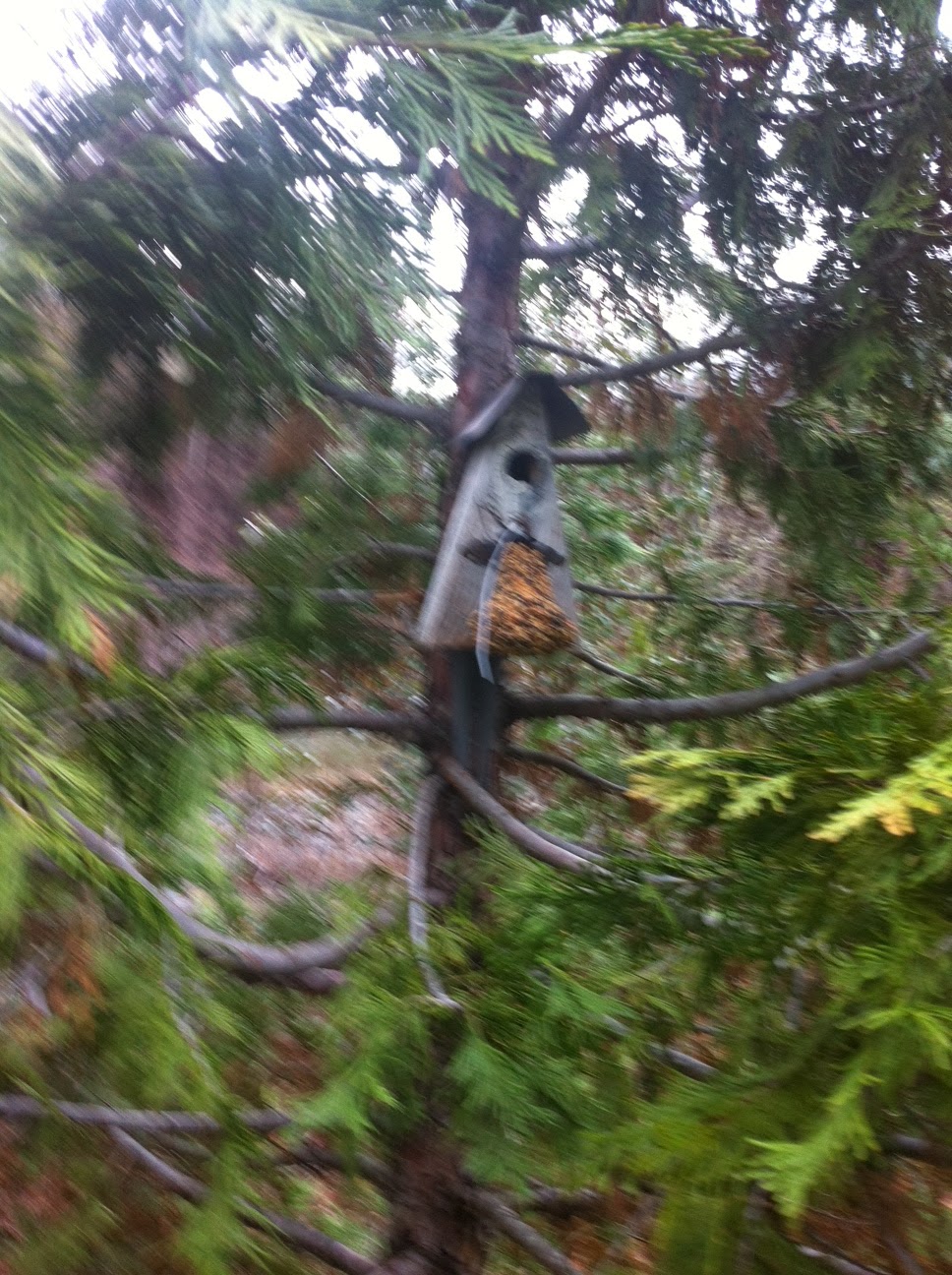 To add to the curb appeal, we added a suet-and-seed bell to the house, hoping to lure a bird family to move in.

The next morning, the bell was gone.  After the third time this happened, we set the CritterCam to see who was attacking the bells. We also attached the bell very firmly to the birdhouse with a cable tie so it couldn't be stolen.

This morning, we reviewed the CritterCam footage from last night:

"It isn't a fox," I had explained to Deborah, "Because they do not climb trees."

It hasn't escaped us that inviting a fox to the neighborhood does nothing good to birdhouse property values, either.