The Price of Being Green


Our home in Rogue River is edging towards all-LED lighting. Often, one can just unscrew a bulb and screw in a replacement.

This photo shows four LED tubes in my kitchen.  The two on the left are "Cool White" (4000 degrees Kelvin) with clear tubes, the others are "Warm White (3000 degrees) with frosted tubes.  With clear tubes you can  see the individual LEDs.  With frosted ones, you can't. 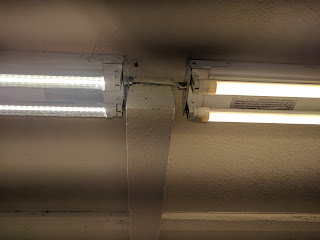 The F40-T12 is a commodity item, and LED replacements are easy to find.  The originals are around $3 each, the LED versions more like $10.  But since the LED versions use less than half the electricity of florescents and last longer, the cost can be recovered.  In my experience, LEDs last essentially forever; florescents a few years at best.

So, you've decided to replace your tubes with LED versions, eh?  Good, but it takes some planning. Check the label on one of the florescent tubes.  Be sure it's an F40-T12.  If not, well, you're on your own!


I prefer "single ended" tubes.  They take power from the pins on only one end.  The ones on the other end are not connected.  That makes things simpler and ensures that wiring on the unused end doesn't affect the tube.  A label shows which end is which.

Once you have the replacement tubes, you're ready to install them.

Note: the rewiring is not reversible, so the modified fixtures cannot be used with florescent tubes.

First, TURN OFF THE ELECTRICITY. It's best to turn off the circuit breaker, since someone might easily turn the switch on without realizing that you're working on the fixture.  Leave a note on the breaker panel that says the breaker is off and to leave it that way.  Wear eye protection.

The tube holders are called "Tombstones," because of their shape. To remove a tube,  carefully rotate it 90 degrees or so.  At some point, the two pins on each end will line up with slots in the tombstones so the tube can be pulled straight up out of the fixture. Be careful, since the tubes are fragile.

This picture shows two tombstones and the vertical slot between the two contacts.  When the tube is rotated so the two pins line up with the slot, the tube can be removed.  When rotated so the pins click into the notches on the contacts, the tube is connected. 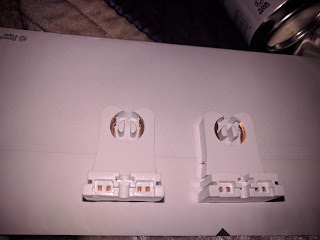 Remove both (or all four) florescent tubes and set them aside in a safe place.  Turn the small latch on the fixture cover until you can remove the cover.

Inside the fixture is a "ballast" something like this one: 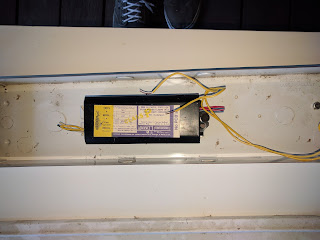 There are a bewildering number of types of ballasts and starter/ballast combinations.   Some "Magnetic," others are "Electronic."  Some are "Quick-Start," others "Instant Start." We don't care, because we're going to disconnect it anyway.

Some LED manufacturers say their tubes will just plug in with no changes to the fixture.  That has not always been my experience. 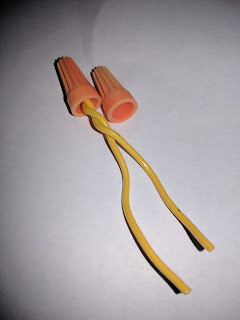 One end of the fixture will have red and blue wires, the other has yellow wires.

At the other end of the fixture, cut the two yellow wires near the ballast.

The power wires generally are black, white, and green (or bare).  The green ("Ground") wire connects to a screw on the fixture.  Leave it there.  Unscrew the wire nuts on the incoming black and white wires. Sometimes a second pair of black and white wires continues to another fixture.

Cut the black and white wires that emerge from the ballast near the ballast end and discard them.

Using an ohmmeter, make sure that the each yellow wire is connected to one contact on each tombstone, and that there's no connection between the two contacts on the tombstone.  (If there is, you'll need to replace the tombstones with "Non-shunted" versions).  If you're lucky, though, your fixture already HAS non-shunted tombstones.

Review your work.  You've checked to be certain that the two contacts on all the tombstones are not shunted together. You've cut the red and blue wires to the tombstones short and taped them back. You've cut the black and white wires from the ballast short, and you've connected the incoming black and white wires to the two yellow wires.  There should be no wires left connected to the ballast.

The reason for rewiring is that the ballast is not needed by the LED tubes.  If you use "single-ended" tubes (as I do), be sure the end labeled "AC INPUT" or similar goes at the end of the fixture with the yellow wires.

Before replacing the fixture cover, carefully install the new LED tubes and try them out.  If all is well, turn the power back off, remove the tubes, replace the cover and replace the tubes.  You're done!  If all is NOT well, check your work again.  If you can't see what's wrong, ask for help. Manufacturers often supply a stick-on label that says the fixture can only be used with LED tubes, not florescents from now on.  I put the label at the powered end of the fixture to remind me which one it is.

Here in Oregon (and in most other places) it's illegal to put florescent tubes in the trash.  They contain mercury, which is released if the tube is broken.  Take the tubes to your local recycling center, where you'll probably pay to recycle them. Southern Oregon Sanitation charges 25 cents per foot of tube, so $1 for each four-foot tube.

Some manufacturers claim their LED tubes will work without any wiring changes.  I'd still suggest rewiring the fixtures, because ballasts waste power and can fail themselves. Carefully read the instructions.  For example Hyperikon says their 4' tubes (F40) will work without rewiring, but their 2' (F20) and 3' (F30) versions will not.  Better, I think, to just do the rewiring and be done with it.

The LEDs are brighter than the florescents, use less power and should last much longer.  What's not to like?

All that said, remember that ladders (which you'll probably use) and electricity are both dangerous.  People can and do die.  Don't attempt any of this unless you're certain you can do it safely.