I've spent the past few days playing with a new (to me) amateur radio data mode.  It's called JT65-HF, honoring the dean of digital mode creation, Joe Taylor, W1JT. The -HF variant is by Joe Large, W6CQZ.

Unlike some kinds of internet-linked communication, it's strictly radio:  From my transmitter through my antenna to your antenna and your receiver, and vice-versa.

It's what hams call a "Sound card" mode, meaning that it uses audio to connect your computer and radio.  That lets the PC's built-in, powerful Digital Signal Processing ("DSP") work its magic.  What magic?  Well, for one thing, a dozen or so JT65-HF conversations can go on in the spectrum space of one ordinary ("SSB" - for Single Side Band) voice contact. For another, we're used to thinking that signals must be above the noise to be discernible.  Not so here: JT65-HF digs out signals well below the noise, indeed, signals that one cannot hear by ear at all.

What's interesting, and a bit unnerving, though is how easy it is to make contacts.  The power of DSP and a hyper-rigid set of operating procedures means that even "LPCA" ("Low Power / Crummy Antenna") stations like mine can make worldwide contacts.  It's not a fast mode: You're only allowed to send during ever other minute (48 seconds, actually), and you can only send 13 characters in that time.

Apart from a ham radio station and a computer, the only hardware needed is some kind of audio interface, which you can buy or build yourself.

When you start the JT65-HF program, you're greeted with this: 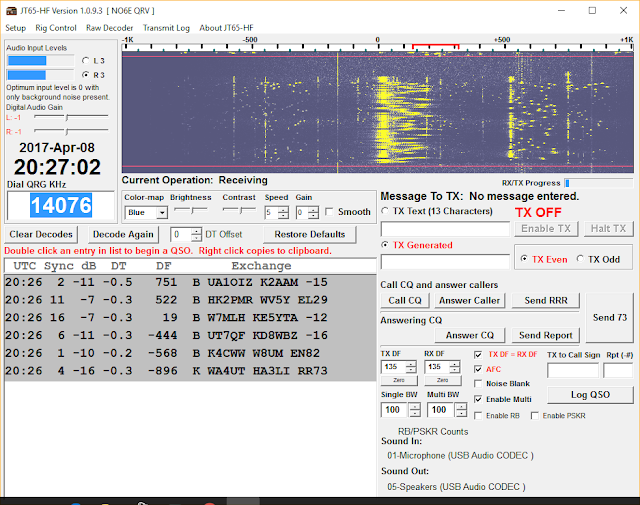 The rectangle at the top is a so-called "Waterfall" display, which shows signals being received.  They slowly move down, letting you see where they are now and where they were a few seconds ago.  (This technology was first used, I believe, in naval sonar systems).

The main thing, though, is the darker-gray rectangle on the left.  It shows all the signals received in the last minute, including how strong they are, which frequency they're on, and what they said.

In a feature carried over from moonbounce modes, everyone transmits on even minutes and listens on odd ones, or vice-versa.  That means you and the person you're trying to contact are guaranteed not to block each other by transmitting at the same time.

Let's see how a typical contact looks, and what I had to do to make it.  Spoiler alert: It isn't much. 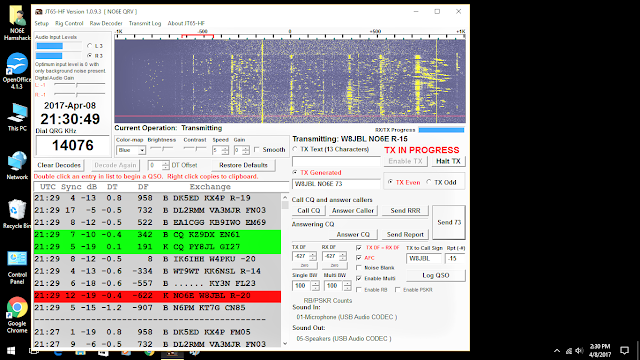 Ignore the red bar for now.

Most ham radio contacts start with a station calling "CQ," meaning "I'll talk with anyone."  (There are other ways, but let's stick with that for now.  When a station sends "CQ", the program automatically highlights it in green.  Looking at the upper of the two CQ-ing stations, KE9DX is calling CQ, and he's in grid square EN61.

One of the foundations of JT65-HF is the "Maidenhead Locator" system.   It assigns a two-letter, two number name to a 1 degree latitude by 2 degree longitude rectangle.  Here's where KE9DX is: 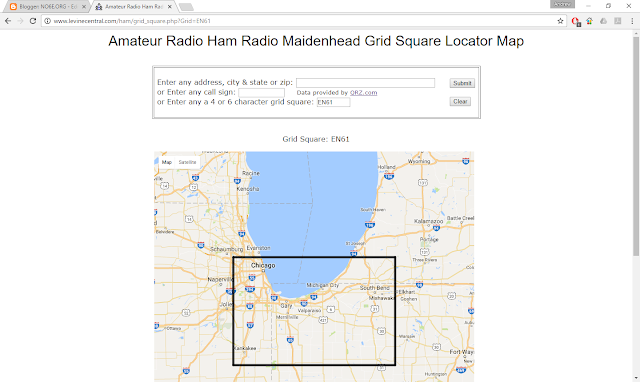 I double-click on his green "CQ" bar to say I want to contact W8JBL.  The program automatically decides what I should send ("W8JBL NO6E CN73"), CN73 being my grid.  When the clock says it's my turn, it sends it.

W8JBL sees my call.  On his computer, he clicks "SEND REPORT." During the next minute, it sends me this: 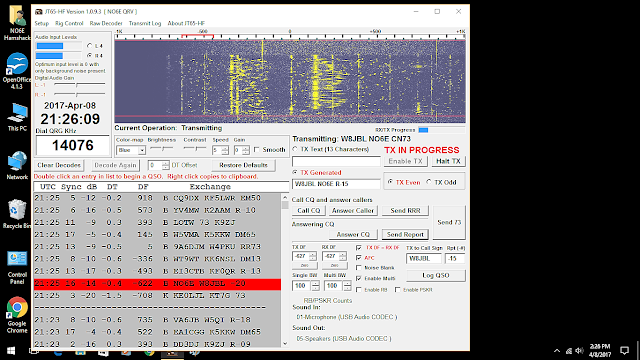 The red bar means the transmission is addressed to me. His computer sends both our calls and automatically appends my signal's strength ("-20").  There's no "eyeballing" - the signal strength he reports is calculated automatically.  In the JT65-HF world, all signals are reported compared to a reference of zero. The "-20" says my signal isn't very strong.  You can see in the square on the right side of the screen that my computer will send "-15," meaning that I hear him better than he hears me.

Now I click SEND REPORT.  In the next minute, my computer sends: "W8JBL NO6E R-15", acknowledging his report and sending him mine.

The last transmission is his: 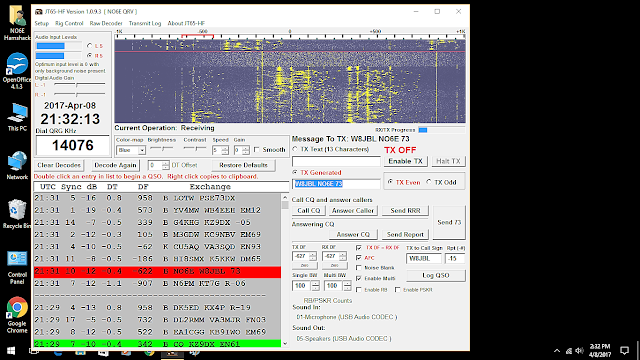 Is there anything wrong here?  Some would say so.  Ever since the days of spark, hams have spoken darkly of how the hobby was getting "Too easy."  The greatest complaints came when voice communication came along and one didn't need to know Morse any more.  (Most of us still know and use it, though).

My answer: If you don't like it, don't use it.  Many hams specialize in a single mode of operation, either Morse, a data mode or some kind of voice.  There's room for all in the hobby.

So, how fancy a station does one "Need" to do this stuff?  Here's a picture of my operation in Bandon, Oregon, which literally occupies one end of a closet: 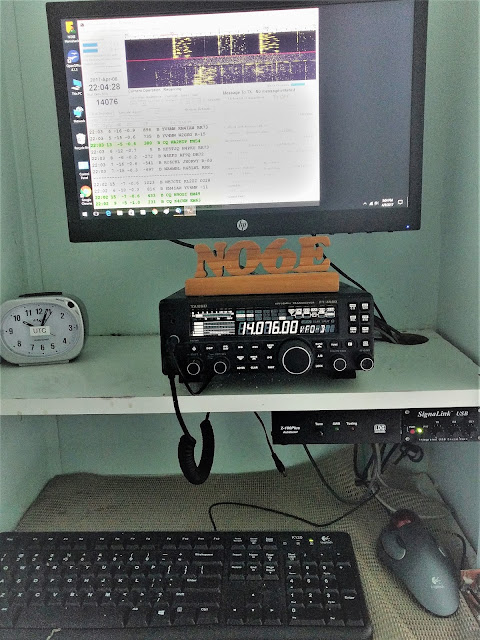 The radio is a Yaesu FT-450D, which costs around $750 new, but is also available used for lots less.  The computer (not shown) is few-years-old dual-core Dell desktop that I got for, I believe, $75. The audio interface is the small box labeled "Signalink USB."  It cost $130, but it makes things easier by having its own sound card built-in, so it needs only a single USB connection to the computer.

The final item is the LDG  automatic antenna tuner, a box which "matches" the radio to the antenna.  About $150, but you can get by without one or get a manual one for less.

As for the antenna itself, it has a fancy name: "Double-Extended Zepp."  Yes, the name comes from the fact that it was used as an antenna on Zeppelins. The reality is much more mundane: It's an 88-foot horizontal wire, fed in the middle with "Ladder Line" transmission line: 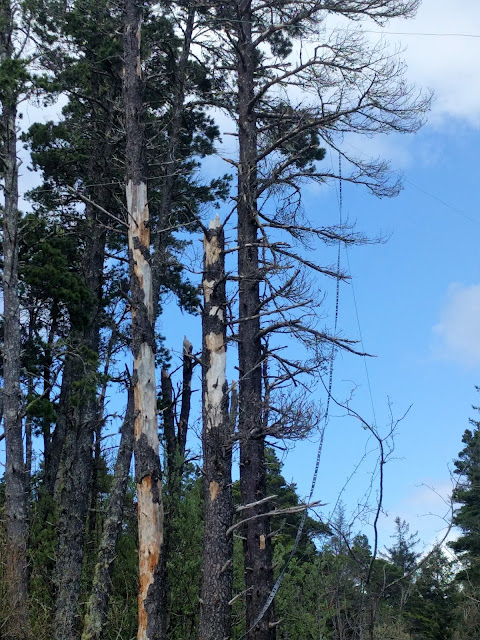 You can see the "Ladder line" sloping up into the pine tree that supports the antenna itself.  Nothing fancy here like telescoping triangular towers and huge aluminum antennas.

Would I be able to contact more people with a fancier radio and antenna system? Absolutely.  But JT65-HF makes it easier for us "little guys" to have fun, too.

Interested? General info on ham radio is available from the American Radio Relay Leauge.  Info on JT65-HF is here.

I was bitten by a dog last Friday morning.  Out for my morning walk, I encountered a dog walker.  I asked if I might greet her charge.  "Certainly," she said, "It'll be fine." 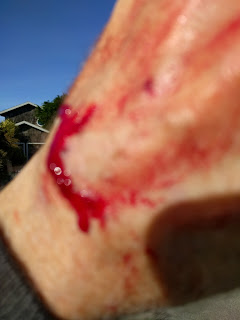 She was deeply chagrined, and explained that the dog was actually her daughter's.  Small comfort, that.  Distracted  by pain and bleeding, I neglected to get contact information and moved on.

After my walk, I washed the bite carefully and applied an over-the-counter antibiotic and bandage.  I hoped for the best.

By Saturday, the best was clearly not happening.  The hand felt hot and was puffy and swollen, so that its normal wrinkly appearance was smooth like an inflated balloon.

In our family, we joke that worrying is the most-distinguishing trait of an Ellis.  As an early therapist told me: "Your family expresses love by expressing worry."  Well, of course! Doesn't everyone's?  Apparently not.

Through social media, my wife and son quickly learned of the encounter and bade me "Get thee to a physician!"  Saturday night the pain was enough to make sleeping difficult, so I knew they were right.

On Monday, having researched both local doctors and hospitals near Bandon, I drove 20 miles or so to Coquille Valley Hospital .  I had considered just going to a family practitioner in Bandon, but wasn't sure how to choose one. Too, I wanted to be seen by someone experienced in the field.

The clerk, nurses and doctor at the Emergency Department couldn't have been nicer or quicker.  They listened carefully to what I said, treated me with respect, and got me on my way in under an hour with a prescription for Augmentin .  The doctor cautioned me, though, that the 20 capsules "might not be cheap."

Gritting my teeth, I returned to Bandon's CVS Pharmacy, where the prescription cost...$3.25.  I'll never understand drug pricing, I guess.

Today (Tuesday), I'm on the mend.  My hand is less-inflamed and cooler, if still a bit swollen. 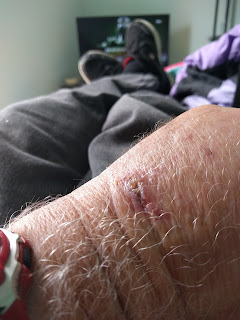 So...lesson learned, right?  Don't try to greet strange dogs even if their handler says it'll be OK.  Move along. Nothing to see here.

Except...what if the dog was rabid?  (Antibiotics, like Augmentin, are useless against Rabies, because it's a virus.)

I had discussed it with Doctor Pasternak.  (I decided not to ask "Isn't your name supposed to be "Zhivago?" figuring he'd heard that joke before). He explained that no cases of rabies in a human contracted from a dog had happened in Oregon for, well, a long time.  The statistics bear him out: Of 621 dogs tested for Rabies since 2000, zero were infected.  (On the other hand, 8.4% of bats tested were positive.)

He told me that rabies vaccinations were "not indicated" in my case.  I remembered horror stories about rabies vaccine, which, at one time, involved, if I recall correctly, a regime of 14 shots into the abdomen.  Nowadays, administration is much more routine, though it's still expensive, around $700.

"But," I quavered, "What if I don't get the shots and become symptomatic?"

"You die!" he answered cheerfully.

Indeed, Rabies is usually described as "Invariably Fatal," a phrase that it is distinctly uncongenial when applied to oneself.  There was hope for the Milkwaukee Protocol for a time, but it's been largely disproven.

I won't be getting the immunization, because, statistically, it's not called for.  But it's not the first time that I've felt as if statistics do not sound completely convincing when applied to me as an individual.  For example, I got a full course of "adjuvant" radiation therapy for my prostate cancer, even though surgery alone would have been enough, statistically speaking.

The takeaway, as journos call it:  Be very cautious to avoid contact with wild animals, especially bats and foxes.  (Note that, while dogs are not a significant vector in the U.S., they are in many foreign countries, including in Mexico).  Here in the Pacific Northwest, bats are, by far, the commonest vectors.  Avoid touching them.  If you think you may be exposed, see a doctor.  If bitten by a pet, be sure to get contact info so the animal's vaccination record can be traced.