Treasures of the SEAPAC Flea Market

One of the joys of any hamfest is the flea market, where
people gather to buy, sell, and lie about radio and other equipment.  As the largest hamfest in the northwest, SEAPAC has an exceptional flea market, divided between those who want to sell only on Saturday and the masochists who want to do business on Sunday, too.

A general observation:  It appeared to me that the high-end classic radios of the 1970's and 1980's, even the venerable Collins models, were softening in price this year.  It may be that the market for them is aging, but I think another reason is that they suffer more and more in comparison to "Modern" equipment, especially in the age of digital signal processing ("DSP") gear.

The skilled flea market buyer waits until near the end of day, when sellers begin to remember their spouse saying "Just don't bring that junk back home!" and reduce their prices.  This year, I bought three vintage items. 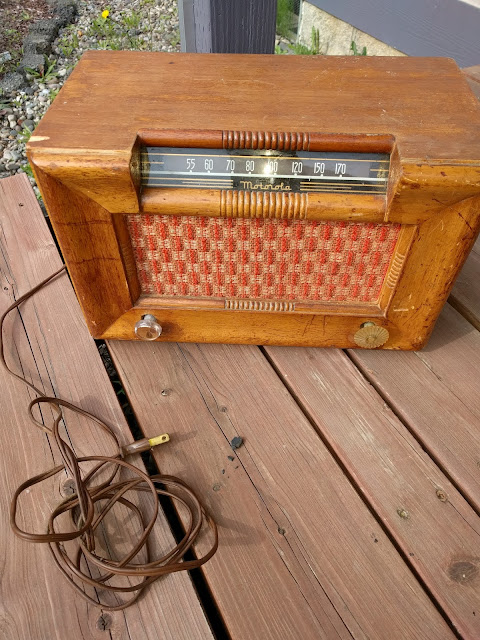 This vintage AM radio by Motorola dates back almost to their transition from the company's original name, Galvin.  It's an "All-American Five" design, a line of radios using 5 vacuum tubes that was popular from the 1940's into the 1960's.

The AA5 is a "transformerless" design, meaning that one side of the AC line is connected directly to the chassis of the radio.  It saved manufacturing costs, but it also meant that you stood a 50-50 chance of a nasty shock if you touched any of the metal parts connected to the chassis, like the screws on the bottom and back. 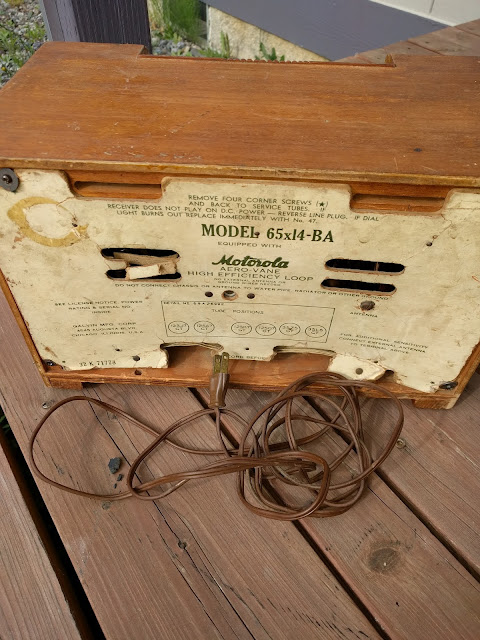 The cardboard back panel includes a loop antenna.  With typical marketing pizzazz, Motorola called it the "Aero-Vane High Efficiency Loop.

This version actually uses 6-tubes, but maintains the disadvantages of 5-tube radios.  An early version, it uses large "Octal" (8-pin base) tubes.  Later versions used "Miniature" tubes of 7 or 9 pins.

As an old broadcast engineer, I have a fondness for old AM radios.  I'm hoping to get advice from  pal Karen Rogers on how to deal with the case.  It's in need of some refinishing. And I'll certainly run in through an "isolation transformer" that avoids "Hot Chassis Disease." 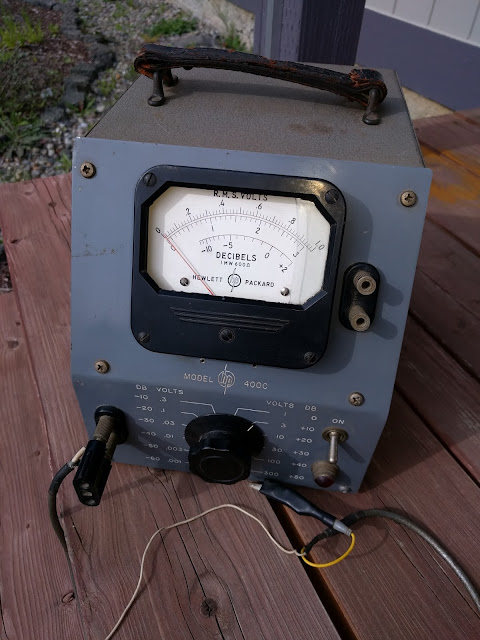 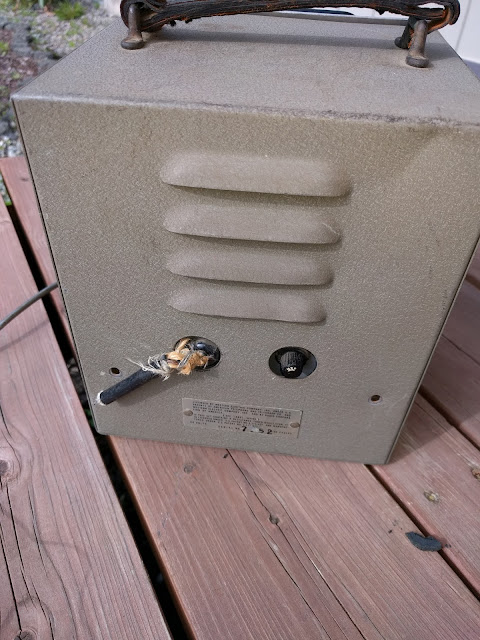 Not a radio at all, but a piece of test equipment, the Hewlett-Packard 400C is a Vacuum-Tube Voltmeter ("VTVM"), which uses a tube amplifier to measure AC voltages.

The 400C, proudly built on Page Mill Road in my old home town of Palo Alto, replaced the earlier 400A model in 1948, making it the rare piece of (apparently) working electronic gear older than I am.

This buy was, literally, free, one of the victims of the "Don't bring it back HERE" syndrome on Sunday afternoon.
It has two serious problems - a broken meter glass and a cut-off power cord, but I hope to fix both.

I really have no conceivable use for the thing, but I love it for its home-town ties and beautiful build quality, including real engraved labels. 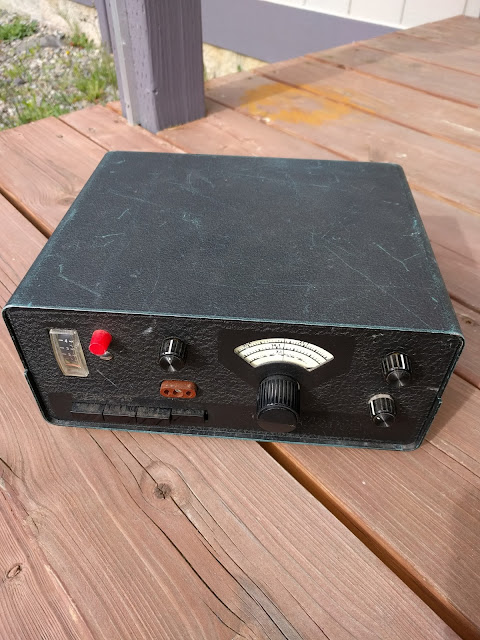 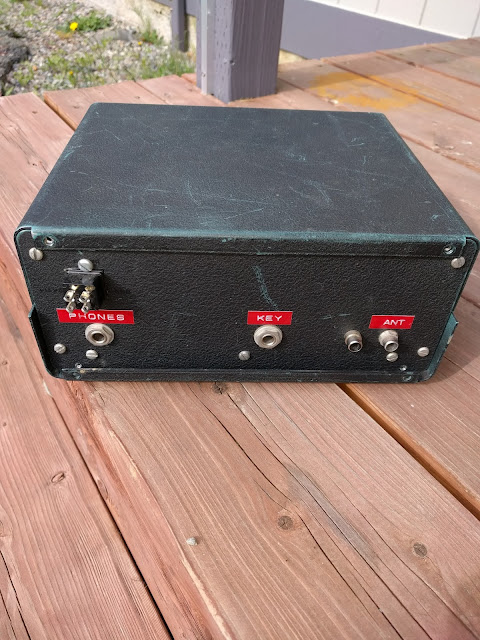 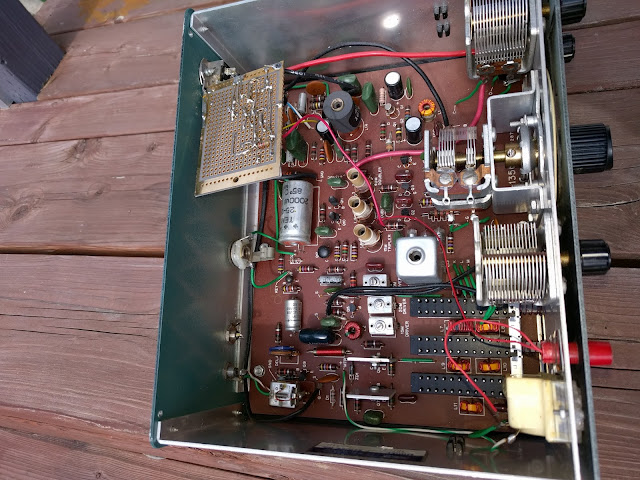 Just because the Rolling Stones had a song called "Paint It, Black" does not make that an automatic good idea. Made by the beloved Heathkit company in the 1970's, the HW-7 was lovely in its original green, which you can see inside the case.

The HW-7 was Heathkit's first "QRP" ("Low-Powered") ham transceiver.  It operated in CW (Morse code) only on only three bands.  The receiver was a "Direct-Conversion" design, simpler but much less capable than the dominant "Superheterodyne" design of the day.

DC receivers had several notable defects.  They were subject to interference from nearby AM broadcast transmitters, and "nearby" meant "Up to several tens of miles."  They also had poor selectively, meaning that a received signal could be heard TWICE as you tuned through it.  One was signal itself, the other the "image" of it.  Choose the image, and you'd respond on the wrong frequency.

Not satisfied with these deficiencies, Heath saddled the HW-7 with another by using a MOSFET ("Metal-Oxide- Silicon Field-Effect-Transistor") design that responded to the square of the incoming signal level rather than a multiple of it.  That made it inherently non-linear, the worst accusation one could make of a receiver.

Heath ham transceivers large and small used the the "HW" prefix in their model numbers, which led to their being referred to as "Hot Water" radios, that being what the user was in when using one, I guess.

The fact that the HW-7 was quickly succeeded by the HW-8 and HW-9 is a testament to its weaknesses.

For all that, the HW-7 is a charming little radio, one of the very first QRP commercial ones.  I may consider some modifications to improve it, though doing so is analogous to putting a small-block V-8 in a 1956 Nash.

I'll have to figure out what the perforated-board addition shown in the inside picture is.  It's no accident that hams often translate "Modified" as "Molested." The 4-pin "Jones" plug on the rear panel attached to it is not original, either.

Here's the original appearance of the HW-7.  Better? Oh, yeah. 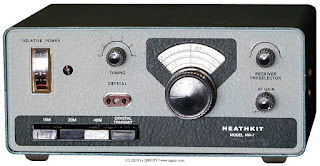 The takeaway: Don't throw those old radios in the trash! Some fool will actually want them.

But don't paint them black, either.