Pissing Blood and the Placebo Effect


“Pissing Blood” is often used figuratively, to indicate great anger or upset. Taken literally, though, it's nothing to be envied.

In 2008, after a diagnosis of prostate cancer, I had both a surgical prostatectomy and adjuvent (“helper”) radiation treatment to treat the cancer. I remain glad that I had both.

The combination of surgery and radiation left my nether region a scarred and radiation-blasted landscape. (Even adjuvent radiation is at a dose that would be fatal if it were sent to the whole body). One of the annoying complications: After a firm bowel movement, my next urination would start with some blood, then taper into normal straw-colored pee. A few years back, a cystoscopy (where a camera is threaded up through one's penis) heat-sealed a few of the bleeding blood vessels. It worked fine. The remaining episodic bleeding was no big deal.

Early in 2017, I volunteered for the COSMOS study, which aims to find out whether taking cocoa supplements and/or multivitamins could prolong life. It's a valuable study, run by Harvard Medical School and Brigham and Women's Hospital, and it's still going on. If you're interested in volunteering, check out their website, www.cosmostrial.org .

When you enter the study, they send you the study medications, conveniently blister-packed for each month: 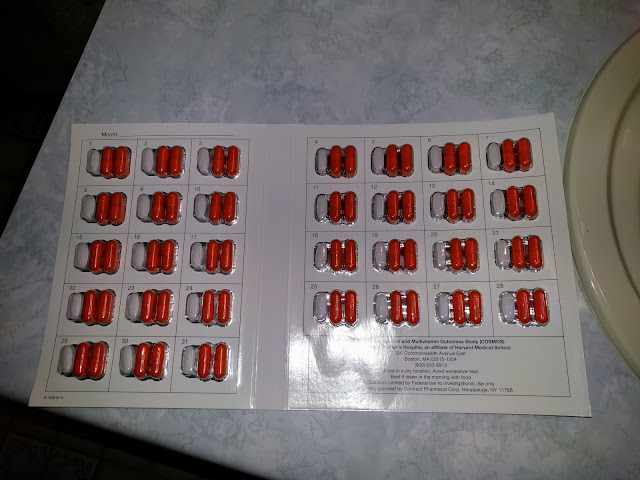 As with any reputable study, you don't know if you're receiving the study medication or a placebo, an inactive capsule. In this case, they're studying both the (white) multivitamin tablets and the (orange) cocoa supplements. (The cocoa supplement tablets are more powerful than one would get by, say, eating a few chocolate bars each day). Part of the agreement you make with the researchers is NOT to take either cocoa supplements or multivitamins except for those they provide you. Presumably, the study participants are divided into four groups, each receiving either real or placebo cocoa and real or placebo multivitamins.

In June, I started to notice that my usual episodic blood-in-the-pee was becoming a constant instead.

On our July cruise from Fiji to Tahiti, I spend most of the time eating, diving...and bleeding. Phooey.

As a typical male patient, I would have just continued as things were, but spouse Deborah was sufficiently worried that she insisted I make a urologist appointment after we returned.

A funny story: One of my classmates in the cruise ship's “bunny-slope” SCUBA class was a urologist from New York state. (I didn't discuss any of this with him, figuring that it was, after all, his vacation, too.) Anyway, we surfaced from our second dive, which had gone down 40 feet or so. When you dive, you equalize the pressure in your ears by pinching your nostrils shut and blowing against them. That forces air up the eustachian tubes to the inner ear, where it balances the pressure on the outside of the eardrum from the water.

Anyway, I had perhaps tried to equalize a little to vigorously. When we surfaced, our teacher told me that I was bleeding from the nose a bit, and that I should rinse off my face and mask. It was no big deal. But the urologist made a typical medico comment: “As we doctors say, 'All bleeding stops...eventually.'” True enough, but I was hoping mine would end sometime before my death!

My previous cystoscopy was, let's say, not my favorite thing. The doctor explained that he had done most of the lesions, but left a few that were very near the mouth of the bladder. It's risky to poke around there, because it can leave the patient incontinent. (I often joke about the standard question “Do you wake up at night to go pee?” by answering “Well, I hope so!”)

Again as a typical male patient, I cast about for an alternative to the cystoscopy. I knew that cocoa is sometimes considered a “bladder irritant.” Having little to lose, I decided to stop taking the COSMOS meds for a few days to see if the bleeding stopped.

Four days into the hiatus, the bleeding went back to its episodic state, and has remained there. I emailed the COSMOS people, telling them that I had to withdraw from the study because of a medical complication.

Here's where it gets interesting:

The COSMOS people were very understanding. Since they had an obligation to me as a patient and since I was no longer in the study, they were free to tell me which group I'd been in.

I was in the placebo group.

In other words, I hadn't been taking cocoa supplements at all.

So...why was I bleeding? The standard explanation is the “Placebo Effect:” I thought I was taking the cocoa, and I knew of cocoa's reputation as a bladder irritant (COSMOS had asked about it in one of the questionnaires I filled out). So my body behaved as if I was getting the cocoa even though I wasn't.

It also seemed vaguely insulting, somehow: I'm a somewhat intellectual guy and a fairly knowledgeable medical patient. So, isn't placebo effect supposed to happen to those with a near-superstitious, talismanic faith in medication?

I don't know. What I do know is that I'm grateful that I'm not bleeding (well, not much) any more. I hope the COSMOS study finds good science that will tell us whether cocoa supplements and multivitamins make us live longer or not.

They'll just have to do it without me.