Until the computer age, most communication modes used by ham radio operators had been around for quite a while. SSB (“Single Sideband) voice was one of the more recent ones, first aired around 1947. (Though I later had the pleasure of operating the station that did it, the Stanford University Radio Club's W6YX.)

But computers changed everything, as they have in so many places in our lives. Time was that ham operators would pride themselves on their ability to hear signals barely above the noise level. Computers, though, can hear signals well below the noise. The first really popular digital mode was probably Peter Martinez' PSK-31, which appeared in 1989.

Ham radio is not a totally blue-collar hobby, but its fair to say that most hams one meets on the air are more likely to be strictly hobbyists or technician-level professionals (like myself) than they are to be formally-trained engineers or physicists, and those are the skills needed to develop digital communications modes.

If the average ham was a weekend duffer on the golf course, Joe Tyler, K1JT would be Sam Snead, Tiger Woods or whomever you'd choose instead. A Nobel-Prize-winning physicist, Joe is now Emeritus Distinguished Joseph S. McDonnell Professor of Physics at Princeton University.  (Let's see: Who was that other Princeton physics guy?  Oh, yeah: Albert Einstein).

Over the years, Joe has developed a number of computer ham radio communications modes, each aimed at a particular sub-hobby in the amateur radio world. For many years, the best-known ones were the WSJT (for “Weak-Signal Joe Tyler) modes used in VHF and moonbounce operations.

In 2017, though, Joe stunned the ham radio world with a new mode, FT8. Named for Joe and co-developer Steve Franke, W9AN, FT8 is a narrowband mode for computer-to-computer communications. Like earlier “Soundcard modes,” FT8 uses the power of computer audio cards to do the digital signal processing (DSP) heavy lifting. No fancy hardware is needed – just a regular SSB transceiver, a computer with a sound card and a simple audio interface.

Though only released in Beta test in July, FT8 quickly skyrocketed in public acceptance. It's not quite as sensitive as some of the other digital modes, but, importantly, it runs four times faster. Most digital modes rely on a rigid plan of “turns,” where each station sends and receives in alternative time periods. Most of the earlier modes used one minute cycles – you either transmitted during even minutes and listened during odd ones, or vice-versa.

I've been fiddling with FT8 since July. So far, I've contacted nearly 300 unique stations, a remarkably fast start for a new communications mode in ham radio.

Today, though, was a landmark day for me:

This screenshot shows my contact with Joe, K1JT, himself! It's no exaggeration to say that this was like contacting Marconi in Morse code! I missed O.G. Villard on SSB and Edwin Armstrong on FM, but I got Joe.

Stations from rare locations are besieged by many operators calling them for a contact, and the same applies to “Ham radio royalty” like Joe. He politely asked callers OTHERS QRX, (“Please stand by”) until he finished his present contact. Most did, but some kept calling, adding to the chaos on the frequency.

Without getting too technical, I made the contact using FT8's “Split frequency” mode. This is common in “pileups” on other operating modes, and it helps on FT8, also. The FT8 program displays the audio frequencies sent and received between the computer and the radio. Most of the time, they're the same. But if one unchecks the LOCK FREQUENCY box, one can send and receive on different frequencies. That makes it easier for the “rare” station to hear you, since you're not on the same frequency as the rest of the howling mob. 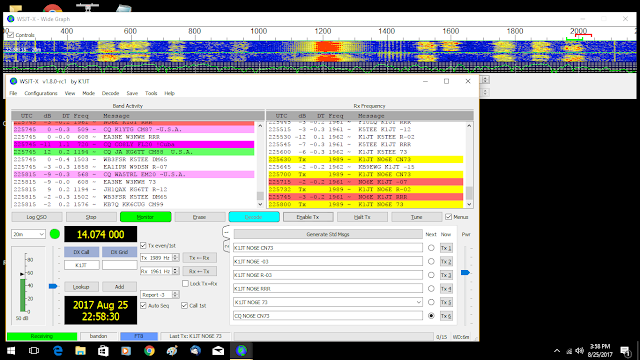 FT8 has had the quickest adoption of any new amateur radio mode, by far. If you haven't tried it, you really owe it to yourself. For stations with less-than-great equipment and antennas, FT8 provides a new universe of contacts. I'll see you there!